Currently, Seniors at Babson College, Misha Lau and Rebecca Jiang are Southern Californians of Asian American descent, ready to take on the world of gaming.

Misha and Rebecca are two dynamic women that, combined, have a wealth of professional knowledge and life experiences that have set them up for business success. Misha works in marketing at a tech start-up and enjoys cooking and learning how to play the ukelele, while Rebecca is looking to pursue a career in the hospitality industry and hikes and thrifts in her free time.

The idea for their card game Unspoken Words was dreamt up during a gap semester from college the two took in the Fall of 2020. To maximize their gap semester, Misha and Rebecca decided that they wanted to start a business and gain real-world experience of what the process of starting a company is really like. The two went back and forth on what idea that they wanted to pursue, yet always came back to a common theme- both women being Asian American and descendants of immigrant parents. The duo recognized some challenges that came along with being raised in their culture, the biggest one being how distant they often felt from their parents. Misha and Rebecca wanted to open the discussion around difficult familial conversations and needed an ice breaker, hence…

Unspoken Words is a card game that is meant to facilitate conversation in a low-stakes environment, meant for players to have fun and grow closer. We’re Not Really Strangers, served as an inspiration to the founders, who liked the concept of a game focused on creating connections and changing one’s perspective.

To play the game, a player chooses a card and reads the question provided out loud, with everyone participating being encouraged to respond. A question falls under one of the five categories within the game that is dedicated to the immigrant experience, being: Culture & Immigration, Relationship, Childhood, Reflection, Identity. There are also 20 action cards incorporated into the deck that add a fun element of action to the game. Some of Misha and Rebecca’s favorite cards from the game include:

“What did you do for a living before you immigrated?”

“What was it like growing up as the youngest, middle, or oldest child?”

Misha and Rebecca have poured their heart and soul into the game, fine-tuning the card prompts by playing the game with their own families. In doing so, the two have learned so much about their families that they didn’t know before, which has helped to form closer familial bonds.

Rebecca, whose family is from mainland China, learned that her mother lived through the Tangshan earthquake in 1976. Rebecca’s mother lived in a neighboring town from where the earthquake hit the hardest and victims of the quake were being sent for medical treatment. Similarly, Misha learned that her father grew up relatively poor and, in order to pay for college, worked multiple part-time jobs and slept in his car just to get by.

Unspoken Words symbolizes the unspoken words that exist within relationships.

For Misha and Rebecca, this came in the form of “I am proud of you and I love you”. Throughout this game, however, the two realized that those unspoken words were tangible and put into action rather than said out loud.

For Misha and Rebecca, the process of creating this game has been more about the cathartic journey than the destination, some of the most rewarding aspects of starting their business being speaking to individuals within the board game industry as well as their prospective customers. The individuals that they have met within their industry have been so willing to share advice with them and connect them to others in their network.

“We really came into this experience wanting to learn and we have learned more than we ever thought that we would”, says Rebecca.

While Misha mentions the fact that she got to talk with a counselor who deals specifically with immigrant families and usually uses vague question cards for families to help them work through issues that they might be facing and is extremely excited about the game and its ability to help her therapy practice. Similarly, in speaking with over 30 children of immigrants, who have struggled with similar relationship challenges to Rebecca and Misha, the founders have felt encouraged to make their game into a reality. 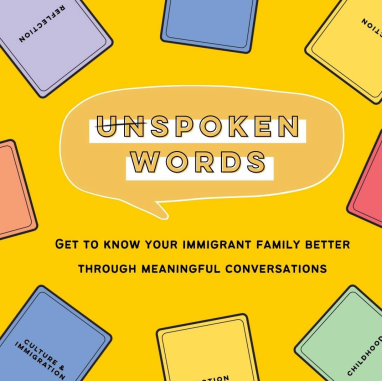 When asked about what Misha and Rebecca hope their players will take away from the game, the two responded that they want those who play their game to learn at least one thing new about their family they didn’t know before. They also hope that the game sparks future conversations and that those who play will feel more comfortable to ask questions. The two mentioned the fact that it took a lot of courage for them to play the game with their parents, yet it allowed for incredible vulnerability and has established the groundwork for more open conversations.

What about the future excites the She-EOs?

The launch of their Kickstarter in May, an exciting milestone that the two have thought about since the very beginning. Misha and Rebecca are also so excited for the day that they receive their prototype and are able to play their game with the signature Unspoken Words cards.

Can’t wait to get my cards in the mail very soon the two of you! *wink, wink*

Although there are so many more posts to write, fun ideas to explore, and people to interview, I think it is about time that the blog takes a pause.
Check out my latest article with @lancesven where we discuss everything in his new book!
Life is like a messy breakfast table
Happy Monday 🏙
For the first time in forever… it’s time again to start thinking about study abroad! Here are tips from two seasoned experts!
Wishing I could have this milkshake every day… also, where’s the milkshake emoji?! 🐄